War in Europe: A Roundtable

📸 See all the pictures here 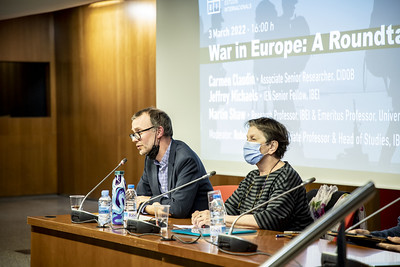 Carmen Claudín is an Associate Senior Researcher at CIDOB (Barcelona Centre for International Affairs). She has written on Soviet and post-Soviet issues for a variety of magazines and newspapers. She has traveled extensively throughout the region and has been an OSCE electoral observer in Tajikistan, Russia, Belarus, and Ukraine. She is member of the Board of Directors of the Migration Policy Group, Brussels; the Advisory Board of the Vienna-based FES Regional Office for Cooperation and Peace in Europe (ROCPE) and of the EU-Russia Strategy Group, convened by the European Council on Foreign Relations (ECFR). She is also member of the Editorial Board of esglobal (the former Spanish edition of Foreign Policy).

Jeffrey Michaels is Institut d’Estudis Nord-americans (IEN) Senior Fellow at IBEI. Earlier experience included working as a Senior Lecturer in Defence Studies at King’s College London, as well as serving as an official with NATO and the US Defense Department. He also holds Visiting Fellowships with the Department of War Studies at King's and the Changing Character of War Centre, Pembroke College, Oxford. His research into foreign policy decision-making and the study of war incorporates different approaches from political science and history. He is particularly interested in US foreign policy from the Cold War to the present, the use of analogies and metaphors in decision-making, as well as exploring the connection between policymakers' conceptions of war and their decisions to initiate or refrain from war.

Martin Shaw is a Research Professor at IBEI and Emeritus Professor at the University of Sussex. He is historical sociologist who has written widely on global politics, war and genocide, held posts in sociology and International Relations in several British universities, and published a large number of sole-authored and edited books as well as journal articles. Recently he has been working on racism, Brexit and British politics.