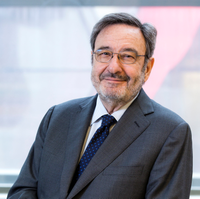 Narcís Serra has been the president of IBEI since its foundation in 2004, encouraging its efforts to turn Barcelona into a reference city for international studies.

Following this academic experience, in 1977 he was appointed regional Minister of Town and Country Planning and Public Works in the Catalan Government presided over by Josep Tarradellas, and in April 1979 he became Mayor of Barcelona. In 1982 he was appointed Spanish Minister of Defence in the Government of Felipe González and in 1991 he became Deputy Prime Minister. From 1986 until 2004, Narcís Serra was also a member of the Spanish Parliament representing the province of Barcelona.

Currently, his main lines of interest are the development of foreign policy, relations between the armed forces and society and the mechanisms of global governance, especially in the field of security. The books he has published include The Military Transition (Debate, 2008, in Spanish; Cambridge University Press, 2010, in English) and, together with Joseph Stiglitz, The Washington Consensus Reconsidered (Oxford University Press, 2008).